Vhembe District near Makhado, Limpopo, South Africa
Written by Ricardo Reboredo on May 12, 2021.
The South African Energy Metallurgical Zone (EMSEZ) is a 10–15-billion-USD Sino–South African development project. Designed as a metallurgical cluster with a focus on steel production, the 60-square-kilometre project is currently in the planning stages, though agreements have been signed with a number of large-scale Chinese state-owned firms including Taiyuan Iron and Steel (TISCO), Power Construction Corporation of China (PowerChina), and China Metallurgical Group Corporation (MCC). The project has been featured at high-level conferences, including the Forum on China–Africa Cooperation (FOCAC). Should project implementation continue, large-scale employment opportunities will be created but the environmental effects are likely to be severe.

Name: South African Energy Metallurgical Special Economic Zone [also known as the ‘southern site’ of the Musina-Makhado Special Economic Zone]
Chinese Name: 南非能源冶金经济特区
Location: Vhembe District near Makhado, Limpopo, South Africa
Type of Project: Industrial (metallurgical complex and manufacturing hub)
Project Developer(s): Limpopo Economic Development Agency (LEDA) (South Africa); South African Energy Metallurgical Base (SAEMB, a subsidiary of Shenzhen Hoi Mor Resources Holdings Ltd.) bears the responsibility for the establishment, development planning, control, security, and management of the zone, though it does not invest in the zone per se.
Main Contractor(s): n/a
Known Financier(s): n/a. Details remain scarce. The project is part of a broader agreement on capacity cooperation between China’s National Development and Reform Commission (NDRC) and South Africa’s Department of Trade, Industry, and Cooperation (DTIC). Planning meetings have included representatives from the China–Africa Development Fund and the China Development Bank; however, funding specificities have not yet been revealed. The Bank of China has also been involved, hosting ‘roadshows’ during which memorandums of understanding and agreements are signed; however, it is not known if they are participating in the project directly.
Cost: Approximately 10–15 billion USD
Project Status: Planned (as of April 2021 the project is nearing the end of the planning and feasibility stage) 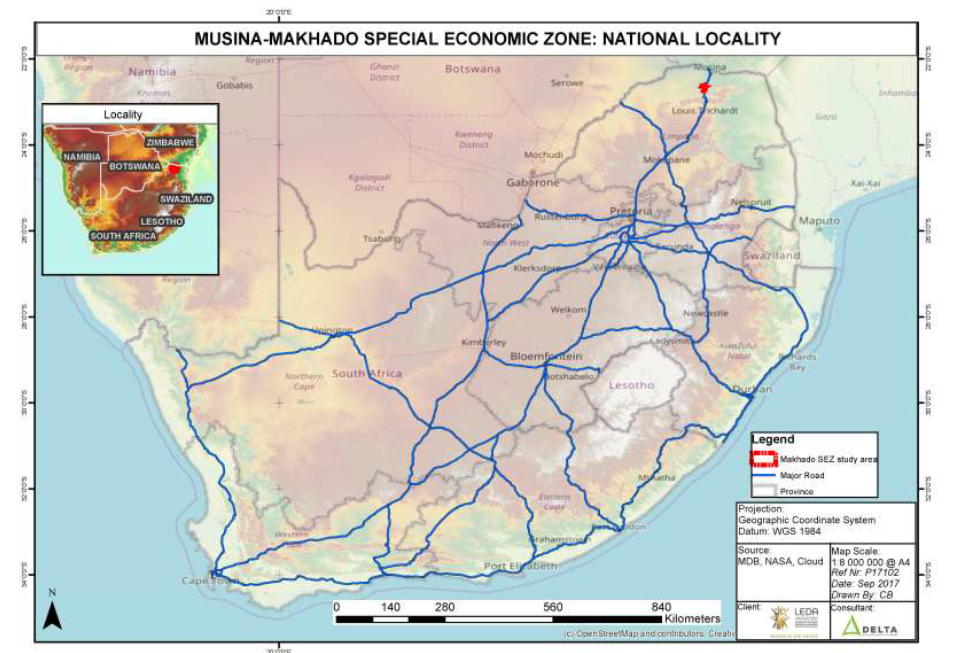 The EMSEZ is a multi-billion-dollar project currently under development in the Vhembe District in northern Limpopo. Located in Northeast South Africa, bordering Mozambique, Zimbabwe, and Botswana, Limpopo is among South Africa’s poorest provinces. As per the country’s statistical service, approximately 67.5% of the province’s adult population lives in poverty. Mining has historically dominated the provincial economy, though agriculture and tourism have grown in recent years. The EMSEZ is part of a government plan to bring manufacturing activity—and large-scale, manufacturing-based employment—to Limpopo.

Conceptualised as a heavy industrial hub/metallurgical cluster with a focus on steel production, the EMSEZ is part of the broader Musina-Makhado Special Economic Zone (SEZ). The site for the project is 60 square kilometresof agricultural land (eight farms in total) between the towns of Musina and Makhado. As of 2021, the zone was slated to include a coal washery, a coal-fired power plant, a coking plant, a stainless-steel plant, a high-carbon ferrochrome plant, a silicomanganese plant, and a metallurgical lime plant. In addition to the metallurgical cluster, supporting offices, living centres, and logistics systems are scheduled to be built.

Following Xi Jinping’s statement to the UN General Assembly in September 2021 that China would no longer build new overseas coal power plants (see this essay in The People’s Pulse), local civil society group Fossil Free South Africa wrote to the Chinese Ambassador to South Africa seeking confirmation of whether Chinese banks and companies would move forward plans to develop coal power and mining operations linked to the zone. The Ambassador responded, and although he did not explicitly state that Chinese firms would not support the coal developments, he reaffirmed Xi’s commitment, stating that ‘China is a country that keeps promises and delivers on commitments’ and that it will ‘vigorously support African countries including South Africa in developing green and low carbon energy.’ The local group interpreted this as confirmation that the plants will not move forward.

The EMSEZ is the result of long-term negotiations between Chinese firms, the provincial government of Limpopo, and South Africa’s Department of Trade, Industry, and Competition (DTIC). According to the author’s interviews, project development began when executives at HK Mining Exchange Company—a small scale, privately-owned Chinese firm—pitched an idea for a logistics and metals beneficiation zone to Limpopo Development Agency (LEDA) officials at the African Mining Indaba, a large mining conference. HK Mining Exchange Company and its parent company, Shenzhen Hoi Mor, are both headed by Hong Kong-based businessman Mr Yat Hoi Ning, who has served as the primary contact for LEDA throughout the negotiation and planning process. The DTIC approved of the idea and integrated it into the plans for the Musina-Makhado SEZ. In South Africa, special economic zones include reduced corporate tax rates for qualifying investments (15% instead of the usual 28%), streamlined customs procedures, and access to government support mechanisms designed for investor retention and the facilitation of new investments.

Initial plans for the Musina zone called for three sub-zones: the EMSEZ, a petrochemical zone, and an agricultural processing and logistics area. As of 2021, only the EMSEZ and the logistics area are continuing as planned. Between 2015 and 2016 the EMSEZ was integrated into wider agreements on capacity cooperation between the DTIC and China’s National Development and Reform Commission (NDRC). Project agreements were then signed during Xi Jinping’s state visit to South Africa just prior to the 2018 BRICS Summit. The integration of the EMSEZ into national-level capacity cooperation agreements has led to the introduction of large-scale Chinese capital as well as substantial amounts of official state support—though the financing specificities have yet to be revealed.

Day-to-day operations are to be overseen by South African Energy Metallurgical Base (SAEMB), a subsidiary of Shenzhen Hoi Mor that holds the operator’s permit. LEDA holds the SEZ license and is tasked with facilitating and managing zone planning and development. The different projects within the zone (e.g., ferrochrome plant, steel plant, and the coal plant, should it move forward) will be undertaken by investors, many of whom are centrally owned Chinese state-owned enterprises (SOEs). The individual agreements generally specify the projects that these firms will be responsible for. For instance, the agreement between LEDA, SAEMB, and TISCO calls for the Chinese SOE to develop, operate, and manage the coking, ferrochrome, and stainless-steel projects. Likewise, the agreement with PowerChina notes that the company planned to develop a coal-fired power plant as an Engineering, Procurement, and Construction (EPC) / Operation and Management (O&M) contract. The agreements note that each party will be responsible for its own costs and expenses.

In a similar fashion, DTIC head Ebrahim Patel recently stated that each investor would bring in their own funds to finance their projects. This suggests that financing will be done directly between the investors and Chinese banks (according to the author’s interviews, high-level discussions have included representatives from the China Development Bank and the China-Africa Development Fund). As of March 2021, the project remains in the planning stages, though as indicated above, a number of agreements have been signed with large-scale Chinese firms to develop the zone. Full zone construction was estimated by one official to take upwards of 10 years. A number of public participation meetings with local communities were convened in 2020, however several were held at short notice and the meeting in Makhado was only attended by 15 people. 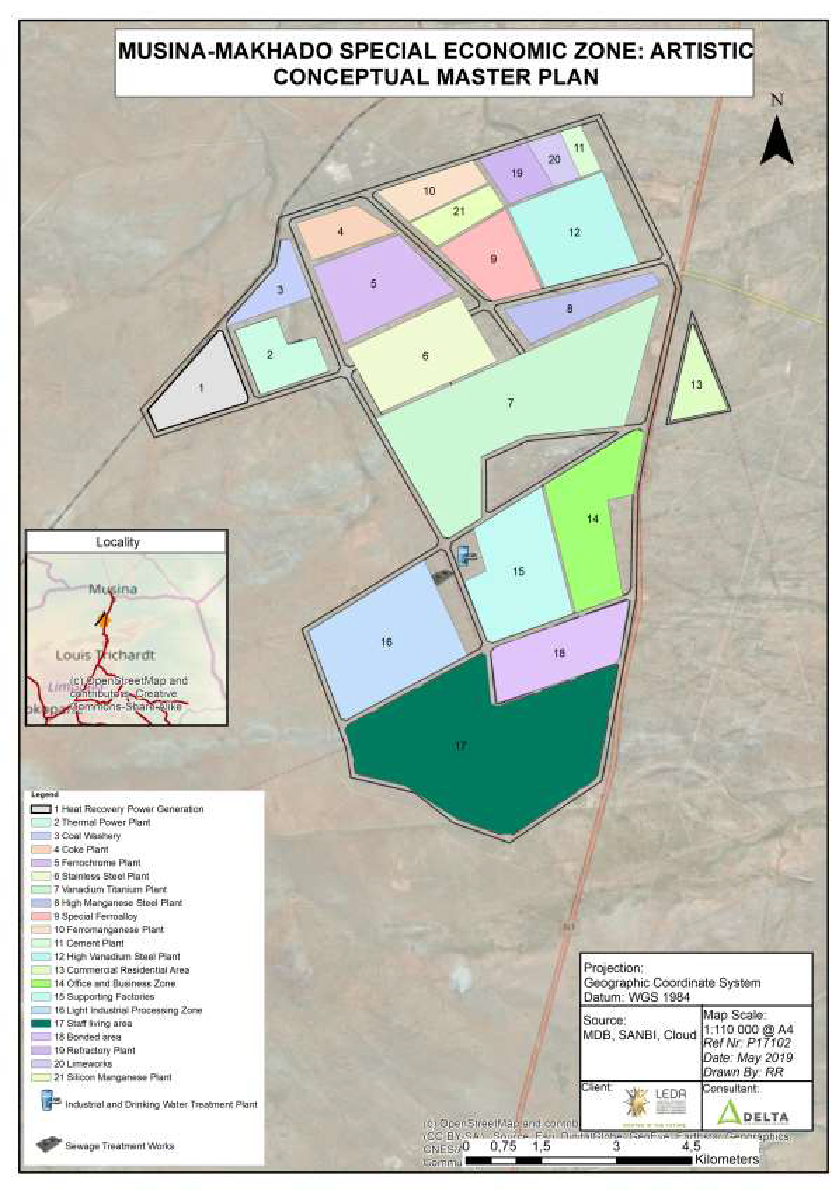 The EMSEZ has been the subject of multiple controversies. Foremost among these is Yat Hoi Ning’s Zimbabwean arrest warrant. As explained by South African newspaper Business Live, Mr Ning—one of SAEMB’s primary stakeholders—is wanted in Zimbabwe over his role in the alleged misappropriation of upwards of two million dollars from companies connected to ASA Resources Group, a multinational mining company with gold and nickel assets throughout the country. ASA has laid fraud charges against Mr Ning and his business associate Yim Chiu Kwan, and Zimbabwean police issued arrest warrants for both in September 2018. In a statement, Ning denied the allegations and instead contended that the reports are inaccurate, arguing that he and Kwan were unjustly removed from the ASA board.

In 2020, AmaBhungane, a South African investigative group, released a report detailing what they alleged were significant failures in the project design and implementation process. In a four-part series published in South Africa’s Daily Maverick, they argued that the DTIC knew of Mr Ning’s legal issues before they gave SAEMB the operator’s license, that the South African agencies overseeing the project are not equipped to do so, and that critical environmental issues have gone unaddressed throughout the development process.

Similar reports in the Daily Maverick allege that the provincial government side-lined existing plans for a waste-free eco-industrial park once the Chinese investors came calling. As per the report, the eco-industrial park was to be one of the Musina-Makhado SEZ’s ‘anchor’ projects. However, LEDA and the DTIC decided to move forward with the far more environmentally damaging EMSEZ after a trip to Guangzhou in 2014.

At the local level, the project has been the subject of much debate between late 2020 and early 2021. As mentioned above, multiple local groups have launched protests; others, however, are attracted to the promise of decent jobs. Officials from the local branch of the Democratic Alliance (South Africa’s principal opposition party) have echoed the broader debate, noting that although the project may bring much-needed employment opportunities to the area, the environmental effects may be substantial. As of March 2021, no violence or conflict has occurred near the proposed site.

Bloom, Kevin. 2020. ‘Killing the Holy Ghost: Inside the R145bn Plan That Would Destroy the Limpopo River.’ Daily Maverick, 1 April. Link.

This website uses cookies to improve your experience while you navigate through the website. Out of these, the cookies that are categorized as necessary are stored on your browser as they are essential for the working of basic functionalities of the website. We also use third-party cookies that help us analyze and understand how you use this website. These cookies will be stored in your browser only with your consent. You also have the option to opt-out of these cookies. But opting out of some of these cookies may affect your browsing experience.
Necessary Always Enabled
Necessary cookies are absolutely essential for the website to function properly. These cookies ensure basic functionalities and security features of the website, anonymously.
Functional
Functional cookies help to perform certain functionalities like sharing the content of the website on social media platforms, collect feedbacks, and other third-party features.
Performance
Performance cookies are used to understand and analyze the key performance indexes of the website which helps in delivering a better user experience for the visitors.
Analytics
Analytical cookies are used to understand how visitors interact with the website. These cookies help provide information on metrics the number of visitors, bounce rate, traffic source, etc.
Advertisement
Advertisement cookies are used to provide visitors with relevant ads and marketing campaigns. These cookies track visitors across websites and collect information to provide customized ads.
Others
Other uncategorized cookies are those that are being analyzed and have not been classified into a category as yet.
SAVE & ACCEPT